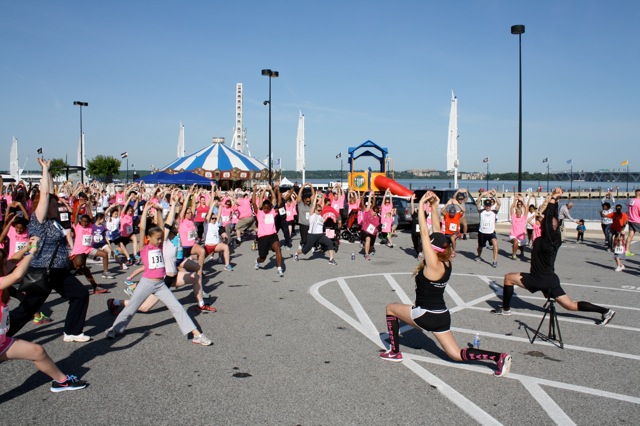 For race results go to www.CharmCityRun.com

It was an emotional day, but one that was filled with excitement and hope. On May 31, 2014 over 300 participants and volunteers came to the National Harbor in Washington D.C. to be a part of the day to raise awareness for HG. The weather was perfect and the location beautiful. HG women and their families came from all over the United States and even an international participant! Some of the states represented were California, Florida, South Carolina, North Carolina, West Virginia, New York, Michigan, Massachusetts and Pennslyvania. The day started with a rally speech from Ann Marie King, co-founder of the HER Foundation, (read Ann Marie’s speech).  King then proudly introduced an HG survivor and her husband, Maribel and Chris LaLanne from San Francisco, who own a very successful fitness gym in the Bay area, LaLanne Fitness Crossfit. The couple got the crowd stretching and moving before the race began. “We are so greatful to Maribel and Chris for being here today, they are dedicated to the cause of helping raise awareness for HG and we are so proud to have them as part of our HG awareness volunteer team,” said King. Once the race began everyone was ready, many HG moms showing how they are back to being stronger than ever for the 5K walk/run.

Once the run ended Caitlin Dean,  a trustee for the UK charity and sister charity of HER, Pregnancy Sickness Support, (PSS) was introduced and gave a speech about the international collaboration that would be happening between HER, PSS and Beyond Morning Sickness to truly raise the level of awarenes for HG women worldwide. (read Caitlin’s speech) Awards were given to those runners with the top times in their age groups and then HG women and their children gathered for a great the annual HG sisters picture at the National Harbor. We hope to see everyone again next year!!!